Since the 1940s, engineers have used a common design language—a set of definitions, symbols, and practices—to draft engineering drawings that can serve as clear manufacturing blueprints or inspection checklists.

Although this system still works well for many traditional manufacturing methods, it hasn’t equipped engineers to produce clear and consistent design documents for additive manufacturing, commonly called 3D printing. That absence of standard methods of communication risks information about 3D-printing designs being lost in translation.

The American Society of Mechanical Engineers (ASME) published an updated standard—based in large part on research by the National Institute of Standards and Technology (NIST)—that includes language specifically for 3D printing. ASME’s standard, titled Y14.46—“Product definition for additive manufacturing,” identifies important features unique to 3D printing and outlines how they should be documented.

The guidance could help engineers from a broad range of industries communicate to manufacturers, product inspectors, and others more effectively. Its widespread adoption could clear a persistent roadblock to applying 3D printing at a larger scale, which could unlock the environmental and economic benefits associated with the technology.

“The industry is in a digital transformation right now, moving away from physical 2D drawings, and additive manufacturing is one of the catalysts since it requires digital 3D models,” says Fredric Constantino, an ASME project engineering adviser. “And if you’re working on one of those models, this standard will guide you in making it understandable to both 3D printers and other people.” 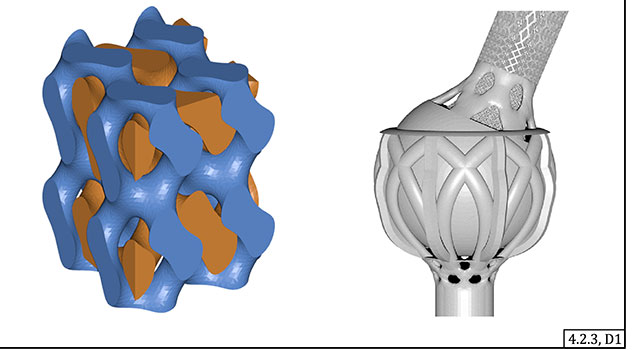 These 3D models exhibit many of the unique degrees of freedom afforded by additive manufacturing, also called 3D printing, such as producing parts with complex geometry and made of multiple materials. A new ASME standard, Y14.46, provides guidance for how to relay 3D-printing specific considerations in design documents. Credit: Reprinted from ASME Y14.46-2022

With subtractive manufacturing, a common production method, machines carve out parts from blocks of raw material according to instructions, which can be outlined in a digital or physical 2D drawing. By contrast, additive manufactured products take shape from the ground up, as printers churn out one layer at a time, fusing them into a predetermined shape that can only be dictated by a 3D model.

In addition to producing less waste than subtractive methods, 3D printing also allows for designs of higher complexity, such as those that aren’t completely solid but partially hollow and filled with a meshwork that could come in many forms.

The lack of a consensus on how to convey aspects of a product related to 3D printing’s distinct capabilities has muddled communication between different organizations and created a barrier to more widespread use of the technology.

ASME responded to this roadblock in 2014, forming a committee of several dozen engineers from industry, academia, and the federal government. The group, co-led by Witherell through 2019, sought to produce a uniform approach for defining 3D-printed products.

The committee developed the standard during the course of several years, drawing on input from 3D-printing experts and NIST research. They also incorporated feedback on a draft version of the standard released in 2017.

With the new guidance, the group introduces concepts to address not only the nuances of 3D-printing designs themselves, such as their potentially intricate internal geometry, but also the peculiarities of the printing process. Factors, including the orientation of a print and whether temporary structural supports are printed, can influence the strength, durability, and other properties of the end product.

Because printers need digital product information to be presented in a particular way, the guidance also includes a section on how to package 3D model-based data so they are machine readable.

Designers are meant to reference the new standard along with several previously established standards, which cover basic design considerations that are relevant to a broad array of manufacturing methods.

3D printing holds several clear advantages over more well-established manufacturing methods, but it hasn’t been implemented nearly to the same degree. One reason for this has been the lack of a fundamental way to get design ideas across—a gap now filled due to the efforts of ASME and NIST.

If adopted by major players in manufacturing, the standard could improve communication for 3D printing, potentially making for a more sustainable and efficient manufacturing industry in the future. However, expanding the standard along the way will be key.

“Some of ASME’s other standards go 10 years, 20 years without revision, but additive manufacturing is advancing so rapidly. We aim to keep pace by adding to this standard as time goes on,” Constantino says. “We expect it to evolve quickly.”

Quality Digest does not charge readers for its content. We believe that industry news is important for you to do your job, and Quality Digest supports businesses of all types.

However, someone has to pay for this content. And that’s where advertising comes in. Most people consider ads a nuisance, but they do serve a useful function besides allowing media companies to stay afloat. They keep you aware of new products and services relevant to your industry. All ads in Quality Digest apply directly to products and services that most of our readers need. You won’t see automobile or health supplement ads.

Our PROMISE: Quality Digest only displays static ads that never overlay or cover up content. They never get in your way. They are there for you to read, or not.

So please consider turning off your ad blocker for our site.